Looking the part with VoIPstudio.

Learn how Fashion One increased productivity by 60%.

The Fashion One television channel launched in April 2010 and now distributes programmes to over 120 countries and for 120 million viewers worldwide. The channel broadcasts 24/7 on a wide range of topics related to fashion and lifestyle and across multiple platforms including satellite and cable television, on the internet, through mobile devices and smart TVs.

The fashion industry is all about making the right impression. To develop its brand and to ensure consistent performance, Fashion One needed an effective communications solution. Fashion One needed to break away from the traditional PBX telecoms solutions that it was currently using in order to better monitor and control costs and to reduce the time taken to set up new users and make other changes.

Fashion One found that VoIPstudio allowed it to eliminate the need for traditional fixed line PBX accounts in all of its offices and mobile phone contracts. Instantly, dozens of bills and 838 telephone numbers were consolidated into one simple unified communications solution.

Thanks to VoIPstudio, productivity increased by 60%

Productivity increased dramatically as Fashion One was able to introduce over 50 IVR systems to direct incoming calls while creating a slick and highly professional impression. Staff worldwide can now also call each other for free over the VoIPstudio network, making calls wherever there is WiFi access. 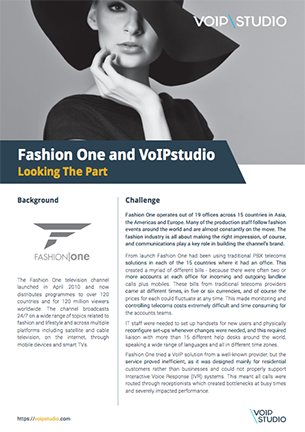